I recently wrote a piece on fast fashion all about… well I think it’s obvious. The piece was inspired by Stacey Dooley’s Fashion’s Dirty Secrets documentary and looked at how fashion giants are polluting our planet like crazy, which we contribute to with every piece of clothing we buy from then. As I was researching, I discovered more and more dirty secrets of the fashion industry: more on the destruction of our planet, and more on the human side of it as well. I dug further, reading a number of articles (subscription to the Guardian incoming), magazines, websites and another documentary: ‘the True Cost’ (it’s on Netflix, lads). What I’ve discovered recently has had a huge impact on how I look at clothes, and will do forever.

So much of our clothing is being manufactured in Bangladesh: it is the second largest apparel exporter in the world. The reason it remains so is due to the fact that garments are made so cheaply, with workers earning less than $2 a day. According to Oxfam, “Nine out of ten workers interviewed in Bangladesh cannot afford enough food for themselves and their families, forcing them to regularly skip meals and eat inadequately, or go into debt.” All so we can get a cheap price.

And with the world’s biggest Primark recently opening in Birmingham, all I can think of is: who is suffering so we can buy cheap clothes? Are these clothes being manufactured in sweat shops with no regulations like those in the Rana Plaza site almost 6 years ago? The site where over 1,100 people died when a building collapsed due to a lack of safety regulations? According to the New York Times, ‘Shiuli Begum was sewing jeans for Primark, when she recalled, “Everything went dark and I felt things falling all over me.” She lost consciousness, and 36 hours later woke up in a hospital… She received no compensation… She can no longer have children and she can barely move, as her spinal cord was crushed.” These disasters may seem a long way from home, but we are part of the problem when we hand over our money to companies who are supporting factories who don’t give a shit about their workers’ safety. And this is happening far too often.

Although some regulations were put into place after the Rana Plaza disaster, those affected by the disaster don’t believe things have changed: “The labour law in this country is pro-owner, not pro-worker,” says Mahmudul Hassan Hridoy. “When oversight reverts to local governance, all will return to how it was when Rana Plaza happened.”

It’s scary to think about little kids making the clothes you wear, but it’s very likely considering 11% of the world’s children are engaged with child labour, much of which is connected to the fashion industry. And what is the main reason for high levels of child labour in 2019? Yep: fast fashion. Fashion companies are constantly pushing to find the cheapest, easiest ways to manufacture clothes, and often this results in child labour, with families so desperately poor that they have to send their kids to work. The fashion industry has such high levels of child labour as many tasks are so simple that young children can understand. In addition to this, manufacturers prefer employing children for certain tasks: beading and sequins are indications of child labour, for example, and for cotton picking: their small hands causing least damage to the crops.

“Where there is extreme poverty, there will be children willing to work cheaply and susceptible to being tricked into dangerous or badly paid work.” This means that these kids miss out on their education, destining themselves to lives of jobs like this. And so the poverty cycle continues.

Around 300,000 tonnes of clothing are thrown away each year here in the UK. Why is that? Well here’s one reason… On average, only 10% of clothes donated to charity shops actually gets sold. In previous years, the unsold stock was bought in bulk by distributors and shipped off to other countries where it would be resold at second-hand markets in countries such as Uganda and Haiti. But recently the used clothing import business has declined. One of the reasons for this is the sheer amount of fast fashion clothing items that are being resold and then breaking after a couple of uses. People don’t want to buy these items, and so the business is declining. With that,  more and more clothing is going into landfill again. And it’s fast fashion to blame. Again.

In addition to this, clothing isn’t being recycled: and it’s estimated that only 1% of the clothing that is, is recycled into new garments, with the materials mostly being used for insulation and cloths which are likely to end up in landfill anyway. This just adds to the pollution of our oceans as well in the fact that polyester-type materials are what makes up a lot of clothing.

How to stop this

We need to be aware. Aware of where our clothes come from and where our clothes go. In my minimalist month, I’ve been very careful about not hoarding loads of crap, which has helped me to really think before I buy things. I think this is super important in changing how we view clothes. We don’t need to buy excessive stuff- it won’t make us happy… This got real deep.

I mentioned in my previous fast fashion post about Depop and vintage sales for buying stuff second-hand. This limits clothes from going into landfill, reduces the demand from fashion brands and it’s usually cheaper than buying something outright… So it’s doing everyone a favour really. Apart from like Missguided’s CEO.

And in terms of where our clothes come from: RESEARCH. I can’t have been the only one that saw this recent headline? 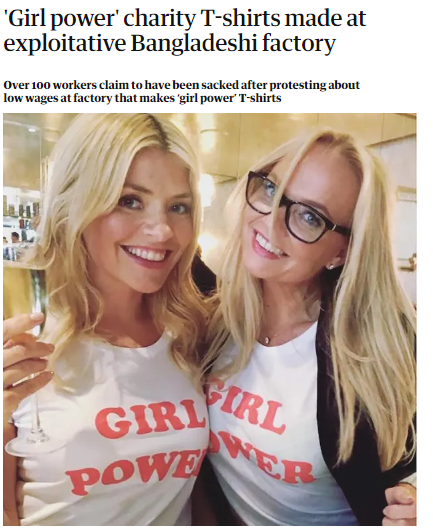 The ‘girl power’ slogans are so painfully ironic.

After my original fast fashion post, I was told to check out Fashion Revolution, which I have well and truly checked out. This is a bit about them (from their website):

And when I say seriously checked out, I mean, read the whole website front to back, ordered their zine and I’m planning on going to their workshop in Brighton next week on ‘how to be a fashion revolutionary’ as part of Fashion revolution week… And I may go to a second one called, ‘can fast fashion ever be sustainable?’ (if I can get my shift covered hehe). But please check them out, they are so cool and their blog posts have been inspiring to me.

I hope this little blog post was informative or interesting, or you feel that now you’ve read it, you’re going to educate yourself more on where your clothes go/come from… Or something… Because that’s what this is all about really.

Thank you for reading, give me a little follow if you fancy. 🙂

Show me some love x