Just to be clear, I say ‘surviving Amsterdam’ coming from the perspective of someone who almost did not survive Amsterdam. *suspenseful music*

Nah I’m kidding (ish), ya gal went to Amsterdam, so I thought I’d write a little guide for those thinking of going to Amsterdam, or going and in need of a little advice on what to do, where to eat etc.

I’ve broken it up into different sections so feel free to skim read at your pleasure to find the most useful or entertaining bits for you. Enjoy and let me know what you think!

If you’re a cheap gal/guy like myself, hostels are the way forward. Due to the fact that Amsterdam is a kinda big European city, the hostels are sadly not as cheap as the ones in South East Asia. We stayed at Generator and it was pretty good: €15 a night, very cute and not too far away from everything. Only thing with staying in a hostel was that my friend and I were both on the top bunks in a room with 2 random men on the bottom. It didn’t bother us. But that is because we were the difficult roommates; coming in drunk at 3am… my friend’s pants falling on the floor/their beds… that kind of thing. So if you want a peaceful stay, or a couples getaway, a hostel may not be the right choice for you.

In terms of hotels, the ones I looked at were either quite pricey, or not very close to the centre. And the price and effort to get a train into the centre everyday would have been annoying- no nipping back to the room to grab a jumper, that kind of thing. Having said that, I was recommended Hotel CC by a friend if you’re planning on spending a little more: 5 mins from the red light district and central station, and it has peng rooms.

As I mentioned, our hostel wasn’t too far away from everything. And by that I mean approx 30-40 min walk from everywhere. But city breaks are meant for doing 25,000 steps a day, right? Just me?

There are also trams, trains, buses, Ubers- so you can’t really be blamed if you don’t want to walk everywhere.

I would advise getting a train from the airport to Amsterdam central as it was only €5.50, and getting a tram/bus to wherever you decide to stay from there. We were told that the alternative would be a €50 taxi. The other alternative is getting a bus and then tram on the way in. The mistake we made was buying a ‘Bus Tram Metro’ ticket which we then were not allowed to use on the tram… So if you buy one of these, maybe check where you can actually use it.

And a life hack, or all round life-saver for what bus/tram to get on- check google maps!

I am SUCH a foodie but actually don’t have loads to write here. Shocking behaviour really.

We had many breakfasts out but only went out for dinner once, and due to the fact I had food poisoning just before I came, along with the fact I’d been eating vegan for 3 weeks and then over-indulging in cheese at this tapas restaurant, meant that I felt extremely dodgy afterwards and therefore it wasn’t exactly my favourite place to eat. Even though it wasn’t their fault…

So this section is instead, a few of my favourite breakfast and dessert recommendations (prepare for a watering mouth): 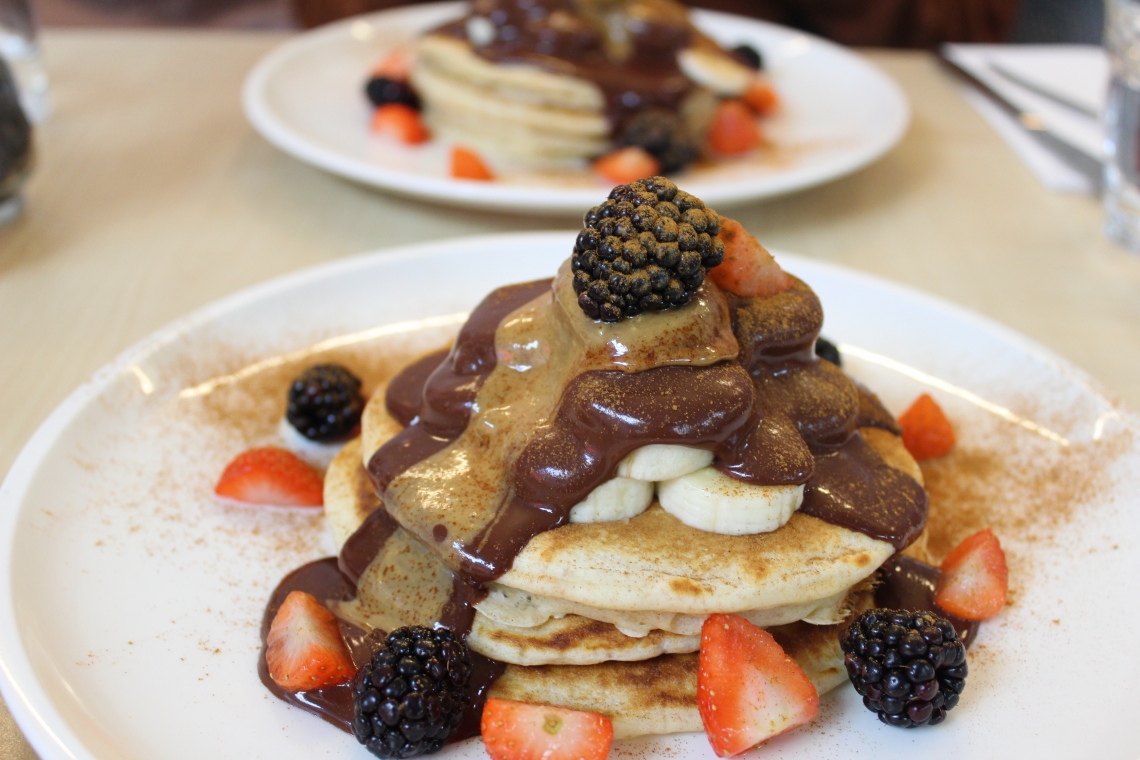 We went to Moak pancakes and it was VERY peng- I got ‘The Infamous’ for €11.50 (as pictured above) which was peanut butter, chocolate, various fruit… not much else I can say other than peng peng peng… and I’m craving pancakes now… 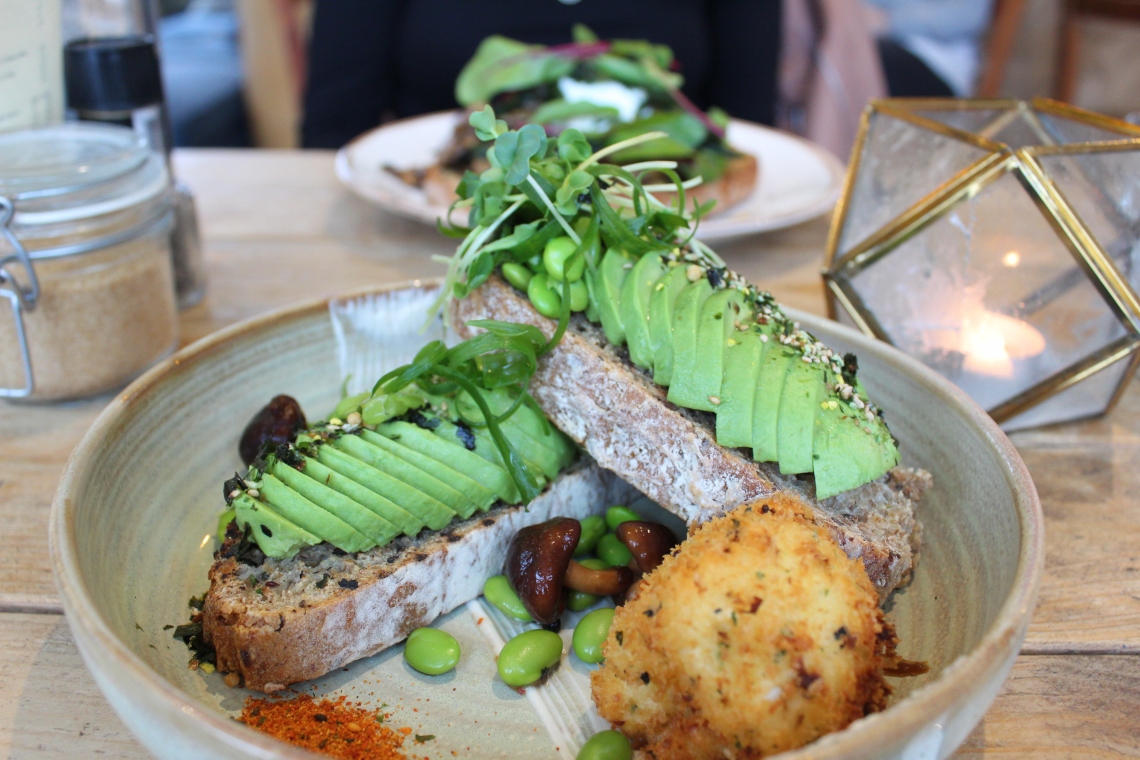 Another cute (and very Instagramable) cafe was Dignita. I had Umami avocado (above) and it was €14 for this japanese themed avocado on toast. Very tasty, and full of unique flavours. 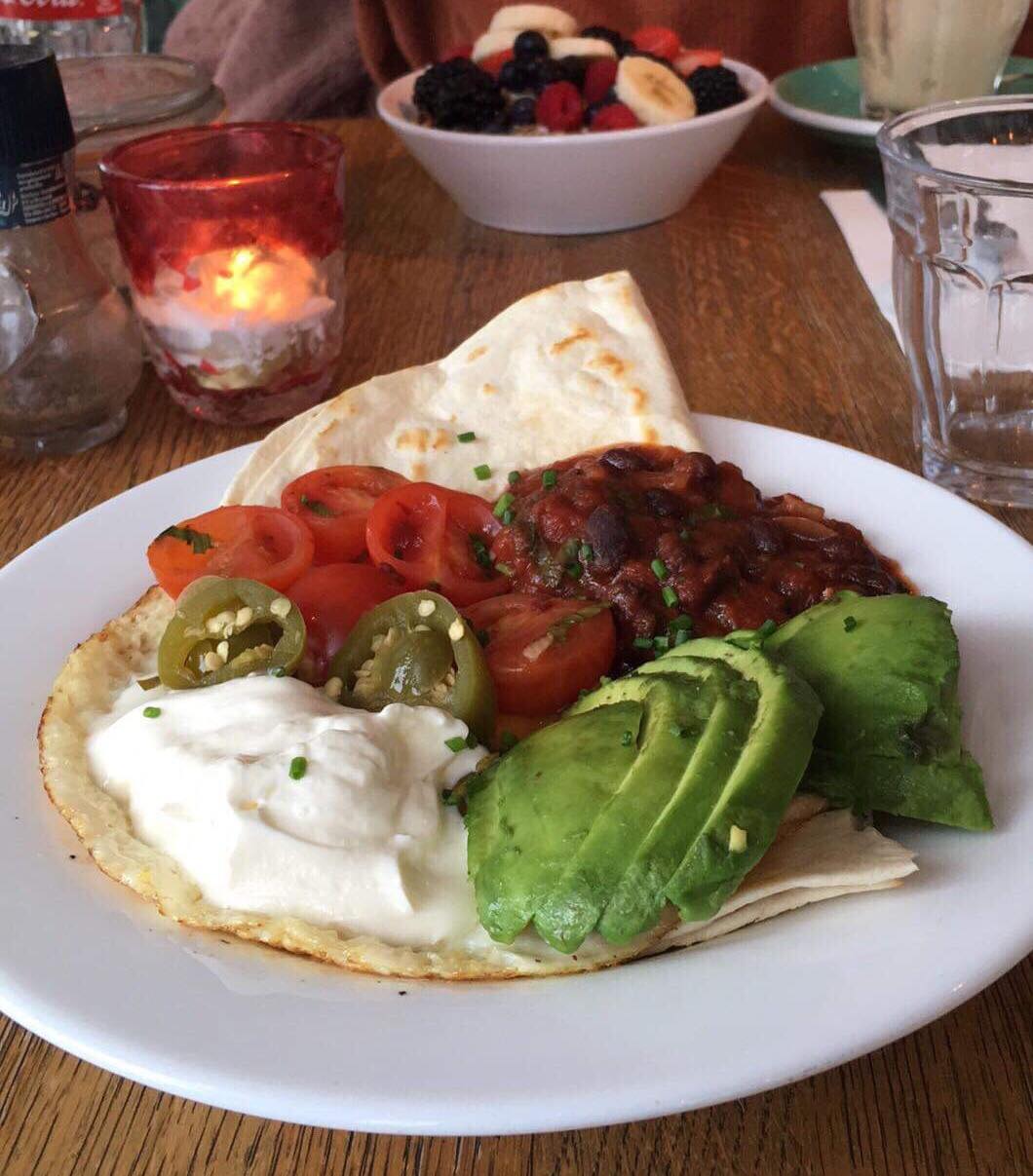 Another place we visited was the Breakfast Club, where I had a very lovely Mexican themed breakfast, with a cheese quesedilla, avocado, egg, jalapeños… all things Mexican. It was very nice, but I was so exhausted at this point- too exhausted to take a nice pic with my camera, so the questionable iPhone pic above will have to do.

I’ve also got to mention Mcdonalds. No I’m not joking, and I’m embarrrassed to admit it, but I did stop there in the airport on the way home. And their veggie burger was so good. Good enough to feel compelled to mention it here. Like, bloody miles better than our terrible UK selection. So please up your game UK maccies.

Now I need to stop talking about food and start my diet again.

As with places that aren’t Wetherspoons, a g&t can be very pricey… And that was the case in Dam. All I can do is recommend pretending your taste buds don’t exist, swallowing you pride, and gulp down a lager. Amstel and Heineken of course are produced in The Netherlands so it’s all part of the culture… I’m personally not a beer drinker unless I’m outside of the UK, because paying €8 for a single g&t with no lime is just too much for me.

And you really want to save some cash dollar while still getting druuuunk, there are plenty of Aldi’s around, which do a bottle of white zinfandel for €2.60. That’s the kind of budgeting we live for, let’s be honest.

We tried to cram as much touristy shit as possible in the 3 and a half days we had, but we did leave out a fair bit because we ran out of time… And because it was so bloody cold (yes it snowed relatively heavily). But here’s the stuff we did do…

Anne Frank House – a classic must do when in Amsterdam. It was very emotional, as expected, but also fascinating. I’m going to reread Anne Frank’s diary now as soon as possible. Make sure you book your tickets online before you go because you can’t buy them on the door anymore! An adult ticket is €10.

Ice skating by the Rijksmuseum – So my friend actually bought these tickets as a surprise for my birthday which was very nice. It’s safe to say, it is far less organised that the pop up ice skating rink in Brighton… In face there is no order at all: people literally people pushing chairs round on the ice, kids pelting ice hockey pucks at you… It is very good though: you get 2 hours time (which isn’t monitored) AND can take a break for a mid-skating bev. And it’s only around a tenner, which includes skate hire. What’s not to love. During his time, this delightful picture of me came into existing as well… 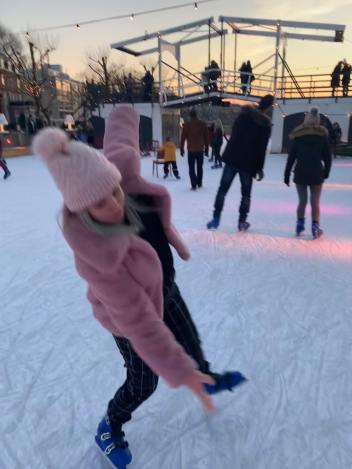 I Amsterdam sign – we walked 40 mins to the Rijksmuseum to discover that the IAmsterdam sign no longer exists, so bear that in mind- google maps lies: it hasn’t been there since December.

Beware of the pics that come out of it… because I’m a child, the pictures below were taken, and of course added to Facebook by my friend. And the pic of me licking a giant penis was one of the first things my mum asked me about. Great. I also have my grandparents, uncles, cousins etc on Facebook, so I’m just praying this isn’t a topic that wil be discussed at the next family get together. 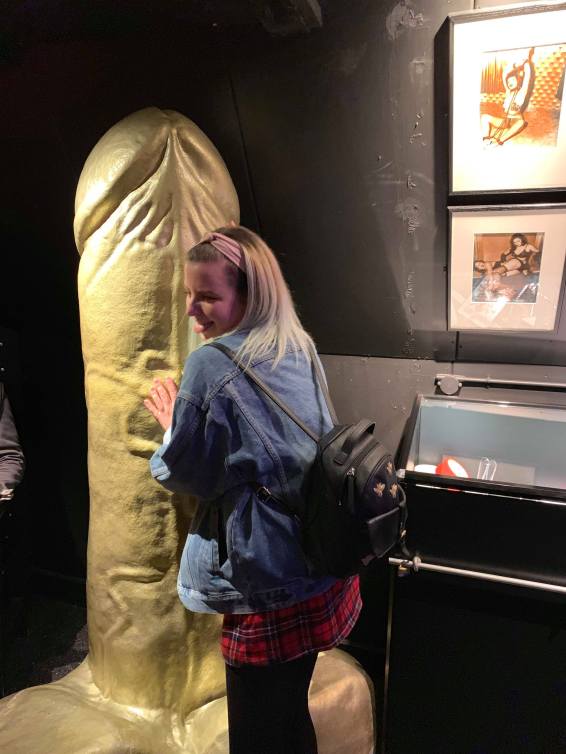 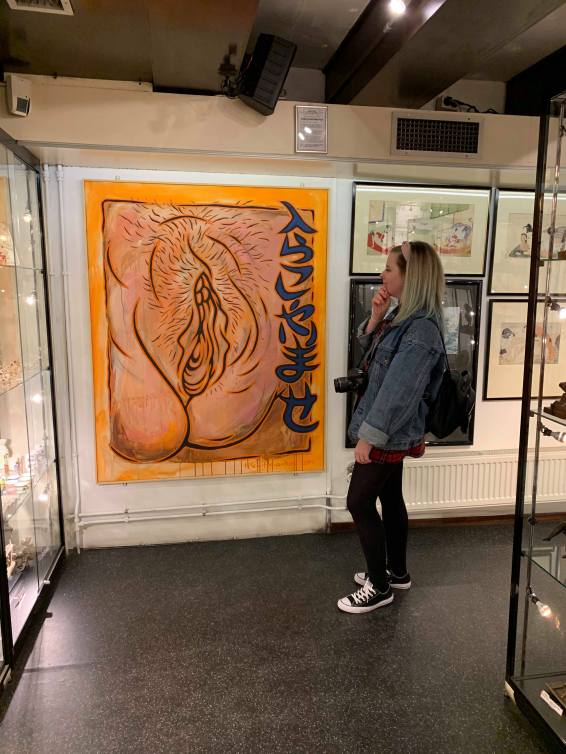 Red light district – we saw a fair amount of half naked women in windows, and it was… interesting? Don’t take pictures because they literally come out the door and start screaming abuse. Which is fair enough really, I wouldn’t want my nudes on some teenage boy’s snapchat story.

we missed a fair amount, so next time I’m back I plan on doing a canal tour, some museums (i.e. Van Gough), Vondelpark (when it’s not snowing), Heineken experience (maybe I’ll learn to appreciate beer more), do some biking (maybe- it looks pretty dangerous. Was nearly mowed down several times… also saw some boy fall off a bike in the snow, so ya know… probs not the weather for it anyway)

Drugs are for mugs.

Nah, just kidding. I have done some research and I can tell you what I have learnt in terms of doing drugs in Dam. As that is a main attraction for many people- for starters, many people come to Amsterdam for the weed culture. As you may know, there are many ‘coffee shops’ in Dam that sell weedy products, that kind of thing: the most famous ones being the ‘bulldog’ coffee shops. Myself and my friend popped into Bulldog the First, where they sell space cakes for €7. I couldn’t tell you about the other weed-type products they sold because, as you can probably tell from this whole section, I know nothing about weed. All I know is that Bulldog the first really smelled incredibly weedy (no shit) and there was a long queue at the bar… I’ve heard the space cakes and weed cookie things they sell in the shops are crap though, and mostly just have weed-flavouring, so if you wanna get baked, don’t buy that crap.

Another legal drug in The Netherlands is magic mushrooms. They are sold all over the place in ‘smart shops’, and are legal because of a loop-hole in the law in that they are ‘truffles’ rather than dried or fresh mushrooms… or something along those lines. We went to a place called Kokopelli… for research of course. They were really informative and helpful, so would recommend there if that’s your thing. Would also advise staying in your hotel/hostel/bedroom if you try them and not wandering round the red light district… Otherwise you’ll probs trip out. The mushrooms are strong… or so I hear idk…

So that is pretty much my full guide to Amsterdam, it’s a little longer than my other posts, but I’ve tried to make it as useful and informative as possible. If you’ve been to Dam, let me know what your favourite bits are!

Thank you for reading

Show me some love x